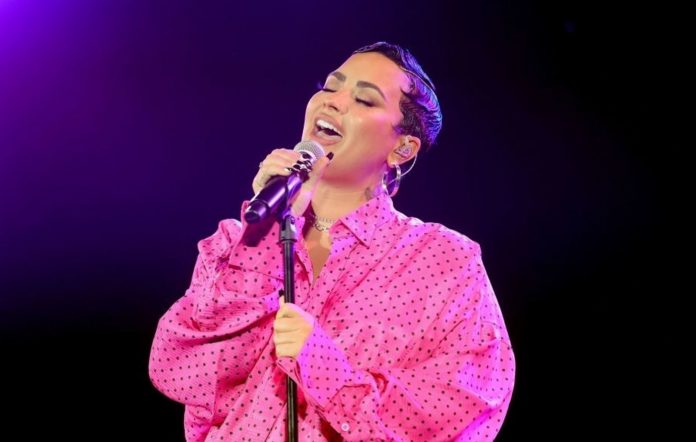 Demi Lovato is celebrating a “random burst of body confidence” after filming their first-ever sex scene.

The singer and actor, who got their big acting break back in the 2008 on the Disney movie Camp Rock, took to Instagram yesterday (July 20) to share a photo of themselves laying down and posing in black underwear.

“Had to film a sex scene today,” they wrote. “My first one! I had a little anxiety going into it but the cast and crew were so professional and easy to work with, it calmed me down immediately. Then, I thought about how proud I am for being able to feel comfortable enough in my skin to do that.”

Lovato continued: “I rarely ever showed my arms before.. now I’m in this!! (Granted, it barely shows anything BUT STILL) I don’t always feel good in my skin, so when I do, AND I feel sexy enough to post – I do just that! It’s important to celebrate the little wins. Yay for this random burst of body confidence and yay for awkward hilarious sex.”

While it’s not clear what project Lovato was filming for, they are gearing up to star in and executive produce an upcoming NBC comedy series about eating disorders titled Hungry.

The ‘Dancing With The Devil’ singer is also set to host their own talk show, The Demi Lovato Show, on the Roku Channel later this month on July 30. They also landed a UFO investigation limited series titled Unidentified With Demi Lovato.

Last week, Lovato opened up about being misgendered, saying that it’s “okay” if people misgender them because the change in pronouns “can be confusing”.

In a post made on Instagram aligning with Non-Binary Awareness Week, Lovato said that misgendering them is OK but it’s important to them that people try and get their pronouns right.

Meanwhile, Lovato, Lorde, Billie Eilish and The Weeknd are among the star-studded array of artists who are set to perform as part of Global Citizen Live in September.