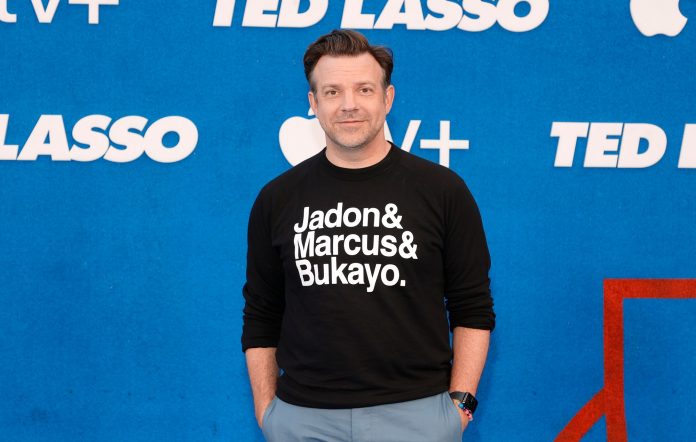 The actor wore the top that bore the words ‘Jadon & Marcus & Bukayo’ at the premiere for season two of his Apple TV+ show Ted Lasso last week.

Speaking on The Late Show With Stephen Colbert, he said: “Well, Jadon, Marcus and Bukayo are three of the English footballers from their national team. Yeah, they’re the last young fellas that took the penalty kicks. They didn’t turn out the way that certainly England would have hoped, certainly a lot of us here in the States would have, too, and people worldwide.

“And they caught a lot of guff online, the three young Black men. And our show is rooted in both, you know, despising things like bullying and racism or whatnot, but it also is rooted and takes place in London, in England. And so yeah, it was just our way to use this big fancy premiere to spotlight them and let them know we got their back.”

Referring to his jumper, he added: “It was just a way to humanise and personify those three fellas. Their surnames are on the back of their kits, you know, their uniform, so that’s why I used the first names, the names their parents gave them because they’re kids, they’re young men and they should have the opportunity to succeed and fail and tie like everyone.”

Sudeikis’ support came after the trio were subjected to racist online attacks following England’s defeat in the Euro 2020 final.

The attacks were called out by Hollywood stars such as Tom Holland and Sacha Baron Cohen.

Meanwhile, Ted Lasso recently received 20 Emmy nominations, making it the most nominated first-season comedy ever. Among them, Sudeikis received a nomination for Lead Actor in a Comedy Series.