The album, which features Bee Gees covers and live ‘Medicine at Midnight’ cuts, arrived over the weekend for Record Store Day 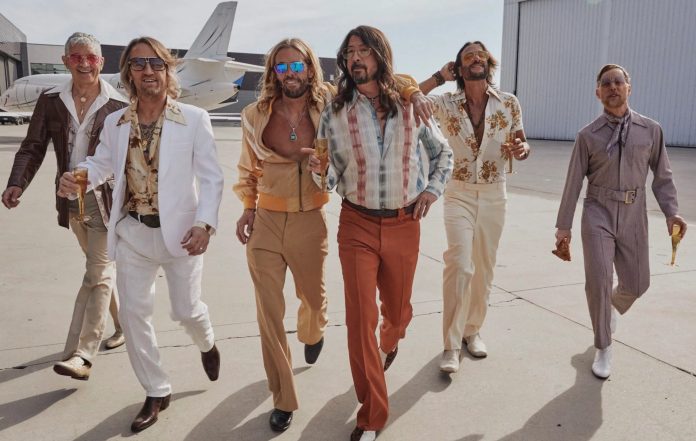 The Foo Fighters‘ disco side project, the Dee Gees, have shared their debut album ‘Hail Satin’ to streaming platforms.

Previewed back in February with the band’s take on the Bee Gees’ ‘You Should Be Dancing’, the album originally arrived as part of a Record Store Day drop on July 17, and was recorded at the band’s Studio 606.

Back in February, Foo Fighters (and Dee Gees) frontman Dave Grohl explained the decision to initially cover the Bee Gees’ ‘You Should Be Dancing’.

“Somebody said, ​‘Hey, have you seen that Bee Gees documentary?’ And I was like the last person on earth – the only person that hadn’t seen it! So I was like, ​‘Why don’t we just do a Bee Gees song?’ And someone was just like, ​‘OK… how do you wanna do it?!’ And I said: ​‘Well, let’s do it like the Bee Gees,’” Grohl told BBC Radio 2.

“We started recording the instrumental track, and then I thought, ​‘OK, well I’m gonna go out and sing it…’ and let me tell you: I have never, ever in my life sung like that, but it was the easiest song I have ever sung in my entire life!”

Last month, Foo Fighters performed a sold-out, full-capacity show at Madison Square Garden that welcomed live music back to New York. The band also recently confirmed their headline set at this year’s Lollapalooza Chicago at the end of this month, as well as at 2022’s Boston Calling festival.

Last week, the band were forced to postpone a show at the Los Angeles Forum after a confirmed case of COVID-19 “within the Foo Fighters organisation”.