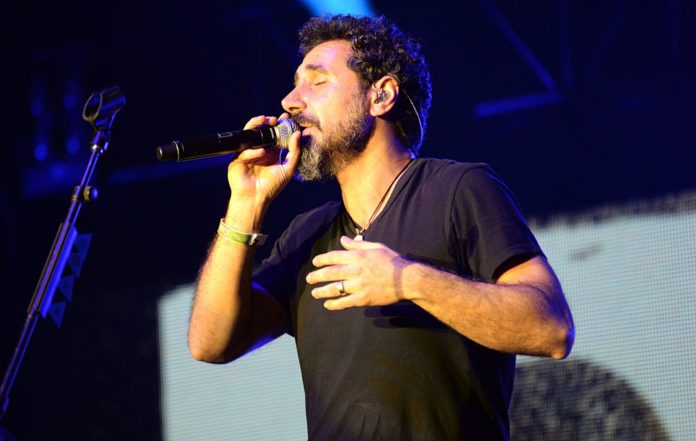 Serj Tankian of System Of A Down. CREDIT: Jeff Kravitz/FilmMagic

Serj Tankian has revealed that his System Of A Down bandmates mean more to him than the music they make together.

Speaking in a new interview, the frontman talked about why the band continue to tour together even though they can’t agree on the creation of new material.

“I think we all see eye to eye and we respect each other as friends and band members, which is why we tour, which is why we have fun together, we rehearse together, we’re in the same space, we crack jokes,” Tankian told HyeBrand With Sona Oganesyan. “Our only problem is [not] seeing eye to eye artistically, and that’s not a bad thing. That’s what artists are.”

He continued: “There were woes of the past, which were aired, and I’m glad they were aired, because it needed to get out — not in public, but amongst us. And they were, and that happened. So that’s fine. The truth is all out there. You can go read it. I don’t need to regurgitate it. But the important thing is that we’ve gone beyond that.”

Going on to discuss whether there will ever be another System Of A Down record, he said: “I don’t know. But the important thing is that we enjoy each other. My friendship to Daron [Malakian] and the rest of the guys has always meant more than System Of A Down to me. Not everyone will say that to you, but I’ve always said that. Because that, to me, is more important. Because that’s where it started. The music was a byproduct of our friendship; our friendship wasn’t a byproduct of our music.”

The singer concluded: “Everyone has a different way of looking at stuff. We’re four quite different personalities, and irrespective of being friends and all being Armenian, we’re quite different from each other, all of us. And that’s okay. That’s what’s made the music great. So it’s done that. But at the same time, we’re not all the same, we’re not always on the same page, and we’ll never be, really. And that’s okay.”

Tankian’s comments come after SOAD’s drummer John Dolmayan spoke out about the “differing opinions” within the band, saying that he doesn’t find himself agreeing with the frontman’s views “very often these days.”

Dolmayan shocked many fans last month when he spoke out in praise of Donald Trump, saying that the US President is “the greatest friend to minorities.”

Tankian, on the other hand, likened Trump to “other corrupt, undemocratic leaders” during a takedown of his much-criticised response to the nationwide protests over the death of George Floyd.

Tankian later defended his bandmate despite saying they have “extremely polarised political differences.”

Writing about Dolmayan and his political opinions while posting an old photo of the pair on Instagram, Tankian wrote: “My drummer and brother in law John Dolmayan whom I love and respect irrespective of our extremely polarised political commentary and differences has always been my stalwart ally in efforts for recognition of the Armenian genocide within SOAD.

“The amount of online hate and stupidity against him and I are unjustifiable,” he continued, adding that “social media has created an erroneous digital society that partially thrives on this reality.

“Remember irrespective of the stance, only artists that truly care and are impassioned will risk alienating their base for what they consider the truth. Our dilemma and possible fallacy is that we have two in one band. Some may consider that a weakness but the artistic, political and social dichotomy if not quadrichotomy (not a word) has made @systemofadown what it is today.”